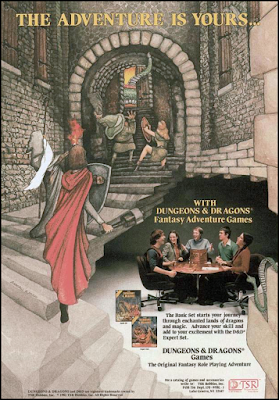 One of the most common questions on 4chan's /osrg thread (still the best place on the web for a steady discussion of OSR gameplay, rampant shitposting aside) is "what are some intro adventures I can run for my OSR game of choice".  As it kept coming up, I decided to create a list that attempted to tackle just that.  It's been iterated a few times and now I figure I'd list it here rather than limiting it to an obscure PDF.
These are adventures adhering to some sort of old-school mindset that were intended to be faced by 1st-level characters, included because I either think that they’re good or because they’re commonly recommended.  Bear in mind that authors’ ideas of what constitutes an appropriate low-level challenge varies.  Also bear in mind that the assumed party size varies, so that some of these adventures were only intended to be tackled at 1st level if the party was quite large and/or supplemented with 2nd-level characters (e.g. B2 was intended for 6-9 players; B4 for 6-10 players).

It's this assumption of huge parties that I think is partially responsible for old-school games' reputation for lethality, since it's quite rare to see regular player groups of that size any longer.  I can see a lot of otherwise cautious, well-prepared players running into serious trouble when revisiting older modules simply because they don't have the small army the older TSR modules in particular assumed you had.  It's this that caused me to set Simulacrum's assumed player group at a more modern 4-5 players in size but to raise the average PC power level a bit: so that I could run B4 and the like with a group size I'm comfortable with and yet be confident that the players still had a decent chance at getting out alive.

No download links are provided (since most of these are for sale) but, with the exception of one module detailed below, purchase or download links for all of these should be readily searchable.  If you have any you think should be added to the list (bearing in mind that I want 2nd ed and back or OSR adventures, and for 0 or 1st level only), please let me know. 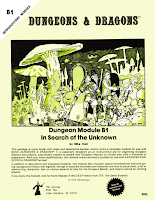 B1 In Search of the Unknown
Basic D&D.  Introductory scenario with DM advice, intended to teach how to not just run but create dungeons.  It does this by leaving lots of blank spaces for you to work your magic, but for that reason it’s only as good as you are, and if you’re just starting, that’s probably not so good.  Also hard to map if you’re teaching that (though see here for an easier-to-use version of the upper level map, and here for an alternate full dungeon layout).  For creatives only. 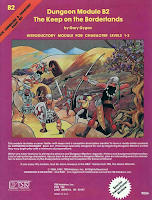 B2 The Keep on the Borderlands
Basic D&D.  A small keep to explore, and a nearby cave system full of beasties, with short play and rules advice for those new to the game.  Very straightforward.  Easier to use out of the gate than B1, but pretty basic.  It can be argued that if you’re just starting D&D then you want basic, because you’re trying to learn a lot at once.  Still, some encountering this as their first D&D experience might be rather bored unless the DM is good at setting up faction play.
Pacesetter has put out two add-ons to this module that expand the original content: B2 Beyond the Caves of Chaos and B2.5 Blizzard on the Borderland.  I can’t speak to their quality. 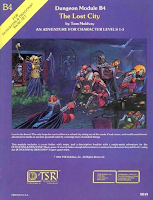 B4 The Lost City
Basic D&D.  Sort of a Conanesque "Red Nails" B2 with a more interesting background and environment.  Though lacking advice for those new to D&D, IMO this is the superior of the first four intro Basic modules.  See here for further material. 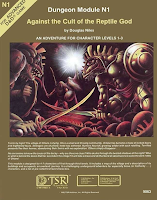 N1 Against the Cult of the Reptile God
AD&D 1st ed.  Technically level 1, but tough at that level.  Great mystery surrounding cultists, and a bit of a Body-Snatchers feel.  Town, wilderness, and dungeon components give some good variety.  Needing an NPC to save the day at the end lets it down somewhat, however.
Pacesetter released a N0.5 add-on (Twisting Trail of the Reptile God) that expands the wilderness portion. 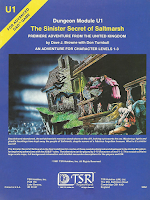 U1 The Sinister Secret of Saltmarsh
AD&D 1st ed.  Scooby Doo: AD&D edition, dealing with an apparently haunted house.  Progress is contingent on the party finding a secret door, however, so this could wind up being just a boring exploration of a relatively empty house.  Intended to lead into two sequels, but they’re not as good. 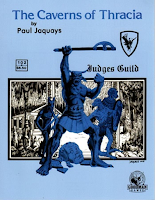 Caverns of Thracia
AD&D 1st ed (Judges Guild).  Technically level 1, but tough at that level.  The Greek-themed module that made “Jaquaying the dungeon” a thing and helped make Judges Guild a beloved name.  A faction-heavy, very open dungeon that’s a good way to see non-linear mapping and exploration in action.  Somewhat rough in terms of keying / room descriptions, though, so it requires more work than usual for a DM to prep.  Republished in its original form by Goodman Games a few years back; that is the version pictured. 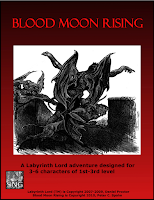 Blood Moon Rising
Labyrinth Lord.  A small village in the middle of a festival.  Colourful timed events, and during it all monsters attack.  Avoids being a railroad, unlike many things with timed events, which is a helpful lesson.  Good NPCs. 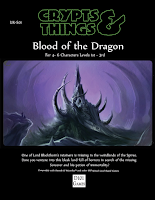 Blood of the Dragon (UK-S01)
Crypts & Things 1st edition.  You’ve got a bandit village, and battle apes, and an area dripping with sword & sorcery vibes.  Unfortunately removed from official circulation for some reason, but hopefully it returns soon. 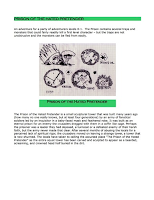 Prison of the Hated Pretender
Vaguely Basic / 1st ed.  A giant statue head with an undead dude inside that’s been imprisoned for his crimes so long ago that no one remembers what they are.  Small dungeon.  Great atmosphere.  Free.

Purple Worm Graveyard
Labyrinth Lord (with some custom bits that are kind of fluffy but oh well).  A short, small dungeon where purple worms go to die.  Stay as long as you dare and harvest the plentiful worm ivory, but the longer you stick around, the more you risk getting to play with a 15HD monster.  Really nails the risk vs. reward issue. 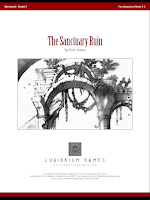 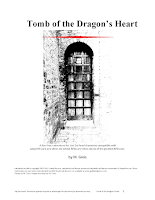 Tomb of the Dragon’s Heart
Labyrinth Lord.  Short (aims for 4 hours) single-level dungeon with some solid faction bits and a good mythic vibe. 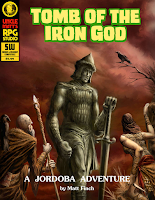 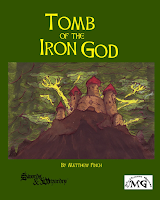 Tomb of the Iron God
Swords & Wizardry.  Designed specifically to be an intro module, with an appendix at the back giving some helpful lessons.  Interesting setting, sort of let down by the second level (too much undead and other non-negotiable stuff for me to like it, though the room of 50 skeletons teaches useful lessons); mentioned here more because it’s commonly recommended.  Still, it’s workable, and the specific design element raises it up.  Revised edition available that removes the advice and changes the layout to an extremely annoying comic book style, but also tweaks the encounters (bye-bye 50 skeletons).

Tomb of the Serpent Kings
Largely systemless.  Designed specifically to teach old-school dungeon crawls.  Most rooms have a “lesson” call-out to let you know why it was added—what lesson it’s conveying to the DM and the players.  Latest is version 4.0.  Free.

Tower of the Stargazer
Lamentations of the Flame Princess (LotFP).  Storming a wizard’s apparently abandoned tower.  Another module with advice designed to introduce old-school play, this one is heralded in some quarters for properly informing players as to the dangers of old-school play.  While it definitely can be fun, IMO it teaches bad habits by not having time pressure (no wandering monsters) and being too aggressive in penalizing players for actually exploring.  Quicker to just listen to Rainbow while considering the advice and making save or die checks. 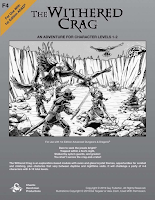 The Withered Crag
AD&D 1st ed.  A dungeon in an ancient, mist-shrouded crater, with differing day and night time play.

Barnacus: City in Peril
Dragon #80.  A bandit hunt, complicated by the fact that the bandits have spies within the city that have to be ferreted out.  The main feature here is the reasonably detailed settlement provided that the adventure is set against.

Citadel by the Sea
Dragon #78.  Orcs and party square off in a search for a legendary orcish spear in a ruined citadel.  A seemingly cursed village and a hidden opponent add some further depth to this one. 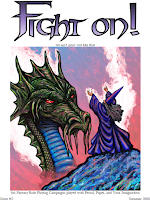 The Darkness Beneath, Level 1: The Upper Caves
Fight On! #2.  Honestly never played it, but Bryce at tenfootpole voted it the best OSR adventure he’s ever seen.

Requires more conversion work than other OSR stuff, as DCC is a heavily mutated version of 3.5, though as these are all modules for 0-level and 1st-level characters they’re (comparatively) simple.  The main note is that DCC doesn’t use gold for XP, and so treasure levels may not be appropriate.  For these reasons I recommend these for more advanced DMs only (unless you’re playing DCC itself, of course). 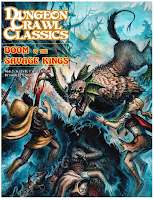 Doom of the Savage Kings
“The footprints of a gigantic hound…”.  Strong Beowulf vibes in a sandboxy setting.  Decent mix of horror and NPC interaction, with a mini-crawl at the end to tie it all together. 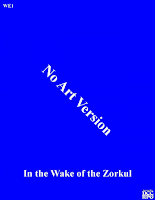 In the Wake of the Zorkul
0-level funnel.  Literally starts in a tavern, but gets much better from there.  Good resource management.  Free. 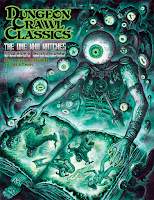 The One Who Watches from Below
Impossible threats, impossible treasure, lots of eyeballs.  Great module for emphasizing player skill over level-appropriate encounters, and a similar risk vs. reward bit to Purple Worm Graveyard. Get the 2nd printing if you can (8 extra pages). 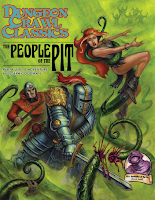 People of the Pit
Cultists are a great enemy, and when backed by a Cthulhu-like patron (and I really mean this: not some stupid large but killable squid monster, but something unspeakably huge and powerful), they can be really scary.  Nonstop unreasoning cultists makes it a bit of a combat grind, though.  Another good one for teaching players that PC death isn’t unusual. 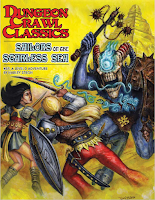 Sailors on the Starless Seas
0-level funnel.  Linear and quite small, but dramatic and evocative.  Good for being at once basic and memorable.

Tower of the Black Pearl
Short.  Linear and with basic opponents, but the setting (a sunken tower that rises from the ocean once a decade for only eight hours) is great: a good way to teach time management and actually considering environmental dangers.

Well of the Worm
Short.  A mini-dungeon full of creepy human-faced giant maggots.
at September 08, 2020