Encumbrance Across the Editions

So in hindsight it was a terrible idea to start a blog just as my dissertation was ramping up.  I'd also like to thank Google for ensuring that all previous comments on this blog were deleted with the loss of Google+.

In any case, I was wrestling with the idea of encumbrance.  I want a system that falls in the happy valley between realism and complexity, both of which of course are subjective.  Perhaps it's better to say that I consider AD&D's "everything measured by coins, and everything measured" system overly fiddly, and 5th edition's "fuck it, carry whatever you want" idea to be far too generous.  OSR games are a matter of resource management, and if you can carry everything, there goes one of the central pillars.

When making a variant of an existing subsystem, I think it's vital to establish your baseline.  That is, presuming you want to capture an old-school experience, your ruleset should deliver something approaching old-school results, even if it does so in a different manner.  So what does that look like?

Let's take a basic fighter and figure out what his item load is going to look like.  Our brave volunteer, Ricky the Burdened, carries:


I've picked the above because to me it's an adventurer's baseline equipment.  Rope is important, but not everyone carries 50 feet of it.  Light sources are often essential, but some characters can see in the dark, and in other cases there's torchbearers to handle that.  Shield plus longsword is generally close to a two-handed sword in most editions, so that alternate weapon loadout doesn't have much of an effect here.  As for armour, fighters rarely just wear leather armour, but heavier protection comes with special rules and so I want to deal with that later.  Now, let's see what this basic load works out to in terms of encumbrance.

In 1st edition there are four encumbrance categories, each of which varies based on the character's Strength score.  With STR 12-13, we're looking at this:

Assuming STR 13, brave Ricky here is encumbered, sitting at the first burden level before he touches a single optional item or finds any treasure.  In AD&D 1st ed, this means his movement drops by a quarter and he loses any Dex bonus to initiative.  As a consolation, he can carry a decent amount of additional weight while still remaining at this burden level.

What if we were to add armour to this?  As I mentioned earlier, it's handled specially here.  While your weight allowance increases as your Strength score climbs, most armour assigns an automatic burden level to its wearer regardless of Strength.  Leather armour has no special effect beyond its weight.  Chainmail (an affordable medium armour), on the other hand, weighs 300 coins, but also always encumbers the bearer, so that they automatically move to the first burden level regardless of their Strength or actual coinage load.  In the case of Ricky, switching from leather to chainmail would raise his item load to 730 coins.  The coinage doesn't actually change his encumbrance category, but takes a heavy toll of his remaining weight cushion, leaving him with only 70 coins before hitting the next category (-50% move, suggested -3 to initiative).

First edition is the only one where choosing a two-handed sword over longsword and shield makes a notable difference; the two-hander is 90 coins heavier.

As an aside, I strongly suggest getting a copy of Footprints #7, which wrestles the godawful layout of 1st edition's encumbrance information into something much easier to use, including noting the system's contradictions.

In B/X, everything other than weapons, armour, treasure, and found non-basic items is abstracted into a flat 80-coin package.  Spikes, rope, rations, of any amount: 80 coins total.  Burden levels are fixed, so that your STR score has no effect on how much you can carry:

Basic gives a simplified version; this is the Expert version.  Though most people say that B/X and BECMI are identical other than layout, both the Basic and Expert systems are quite different and, I think, the Expert version is noticeably better in most ways.  It's simpler, doesn't have the strange "carry as much as you want for 80 coins" kludge, and allows a character to actually carry a decent amount of coinage, essential in a game where your XP primarily comes from treasure.  Returning to Ricky, even in leather armour he's lightly burdened; in chainmail (400 coins), he's the same, though at 670 coins he would be just over halfway through the first burden level.

Second edition keeps 1st edition's separate categories by Strength score, but switches to pounds as the main unit of measurement.  Second ed doesn't bother giving a weight for a week of rations, interestingly enough, another sign of how it de-emphasizes old-school adventuring.  It also gives you two different optional systems to draw on, one of which is far too granular in terms of number of weight categories for my liking.  I'm presuming the simpler one below.  Of note is that, like BECMI, 2nd ed eliminates the automatic burden level for armour: it's just raw weight, so that a strong warrior can really move freely even in the heaviest of armours.

Our friend Ricky is unburdened in leather armour (unless you throw in the bedroll), and and at the first burden level in chainmail (+25 pounds over leather).  2nd ed uses 50 coins = 1 pound, so he can carry quite a bit of coinage. 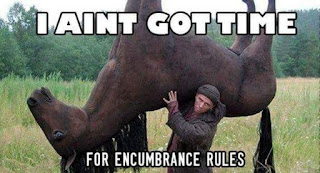 Depending on what system we use, assuming STR 13 (or any STR value, for B/X or BECMI), a starting fighter in leather armour is almost always at the first burden level (about -25% move) before we add any non-standard equipment or treasure.  If we replace our leather with chainmail, Ricky is always at such a level, with the sole exception of him being a 2nd ed character with 17+ STR.

Here's a quick side-by-side comparison of the systems:

Considering heavy armour (plate mail, field plate, or full plate), in recent years there’s been pushback against the very old idea that such left the wearer so inflexible and encumbered that you couldn’t mount their horse without help, pick yourself up if fallen, and the like.  Modern recreations have shown this to be garbage.  At the same time, it’s possible to go too far with this.  Heavy armour is encumbering: even if it doesn’t prevent you from performing many of the tasks it was commonly thought to, the weight ensures that you’re definitely slowed while doing them (see “Obstacle Run in Armour”, by Daniel Jacquet—his film recorded speed drops very close to half).  In D&D, heavy armour (field / full plate) weighs from 500 to 650 coins or 60 / 70 pounds; only a 2nd ed character with at least 18/01 STR can adventure without any burden level in full plate and the standard gear listed above.

So what am I looking for?  Ideally, I'd like a system that approaches B/X or BECMI in simplicity, allows an adventurer to have the basic level of gear without encumbrance, permits an adventurer to actually haul around a decent amount of XP in the form of coins, and recognizes that heavy armour is a serious load but allows armour lighter than this to be worn without automatic burden levels, and allows STR to affect one's carrying capacity.  In the next post, I'll look at how some retroclones approach the problem, and overall look to working out a system for myself.
at January 14, 2020 No comments: