At the end of my last post I referenced the use of a table that added further structure to encounters.  I've long been fond of What are those wandering monsters up to?, from the late, lamented 1d8 blog, and do use it once in a while.  However, with random encounters being essentially entirely improvised encounters, generated then and there and often several times a session, I found it a bit taxing to constantly roll on that table and come up with a narrative on the spot to match the result.

As such, I went looking for something that generated the encounter variety I was looking for, but in a quicker, easier-to-use fashion.  Not really finding anything I liked, I considered how I was running encounters already.  In the dungeon I tended to follow the environment and setting: that is, the dungeon structure itself suggested the creature motivations and approaches.  In the wilderness things were hazier, as there's less structure to work off of: you're in a forest hex, and you roll up an encounter with forest monsters, and that's often all there is to it (e.g. the bandits are intelligent, but unless you've set up some sort of persistent society or structure for them in the hex, they're just an encounter; the T-Rex just doesn't care at all).

I realized that I had wound up varying them tactically.  Sometimes the party is forewarned, and gets a chance to make some decisions.  Sometimes they can outright ambush the enemy.  Sometimes the enemy returns the favour.  From there, I took the improvisations I had made and codified them.

I don't use the standard D&D surprise mechanics, as I wasn’t thrilled with their seemingly arbitrary nature: doesn’t initiative already measure getting the drop on someone?  Why are a quarter or third of all encounters, all other things being equal, complete shockers resulting in 10 seconds (or more) of pure inaction by at least one side (almost always the players, since carried light negates surprise for its carriers)?  It results in a high lethality, without much in the way of room for player skill to mitigate it.  As such, I've switched to making surprise only applicable during ambush-type situations, such as what could be generated here using these rules.  If you do use full old-school surprise, however, these rules can still be useful, in that an ambush not only means the standard surprise situation is achieved, but also lays down tactical parametres: as a proper ambush rather than just a bad surprise roll, the ambushing side will presumably be taking advantage of the terrain to their best effect: missle weapons at the ready, cover taken, ideal target(s) focused on, etc.

I've found the results to be a very simple way to help keep my encounters fresh.  Even just being able to say "a group of ogres break through the treeline ahead and are already almost on top of you" (a Stumbled-upon result) is a touch of variety that helps.  A Brief Warning result might be spotting those about to be encountered a few seconds before they spot you, or it might be "you hear a lot of noise in the brush directly ahead: something's coming your way fast".

It also feeds into the reaction roll, which I always make afterwards.  For example, if the enemy has managed to pull off an ambush, that's going to shape how I develop the reaction result I roll up immediately afterwards.  A hostile result will resolve as usual of course, but an unfriendly Ambushed result would probably lead to a shakedown attempt if the creatures are intelligent.

This is the table: 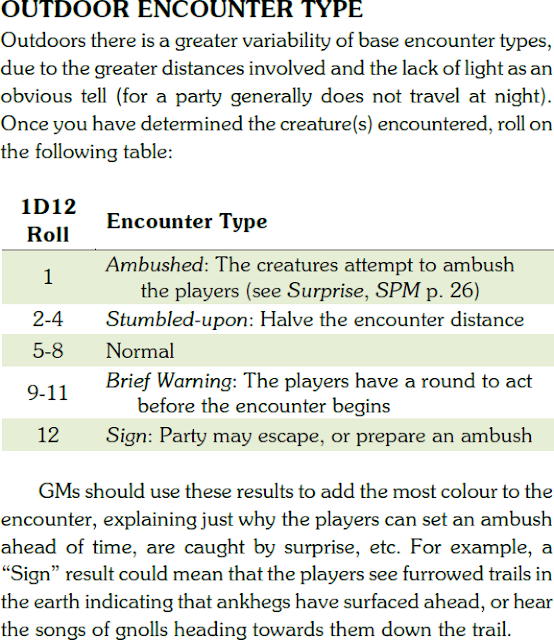 This is really great and useful. It’s an extra roll but easily added to an encounter roll.