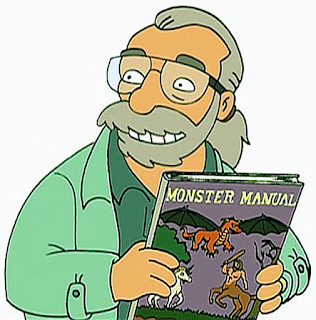 Something that came up recently, as it does from time to time, was the claim that later in life Gygax started his players off at third level rather than first, specifically in the context of his own private OD&D games.

The implications of this vary, interestingly, as people read into it what they want.  That Gygax felt he had made a mistake back in the day and sought to correct it is the most common and most basic interpretation.  Some however take it further, using it as a cudgel against the school of thought arguing that such early-game lethality was the way D&D was meant to be played (as well as against the grimdark / misery-porn wing of the OSR that loves to focus on 1st-level PCs and their tendency to die to overly aggressive housecats).  If Gygax himself couldn't even be bothered to play out those levels, the argument goes, then how can anyone claim that this focus on low-level play and high lethality is anything approaching how things were "supposed to be"?

I'm not one that treats everything Gygax ever said or did as sacred canon; I suspect most people with their own OSR games have this attitude, since you have to be willing to tinker with canon to make such a game.  At the same time, I think you'd be foolish not to pay close attention to what the guy who literally (co)invented the game says, especially knowing that it comes backed with decades of play experience.  But beyond all this, what I found interesting is that no one was actually posting an original source, something that always sets off my historian alarms.

Pretty much every mention of this decision of Gary's goes back to the same page, a post on the Cyclopeatron blog from 2010.  That post in turn links to this (now archived) page from 2005 by Robert Fisher.  That in turn led to this Dragonsfoot thread, from the same author and also from 2005.  Unfortunately at that point the trail gets a bit colder, as it turns out that the information comes from somewhere in Gygax's 440-page ENWorld thread.  And for whatever reason, ENWorld does not allow you to download threads, even if you're a member.

Fortunately, some kind soul took the thread in its original 13-part form and upped it to the Internet Archive, enabling me to put all the PDFs together and search away.  And finally I found the post.

The "reports" referenced come from posts made by Gygax to the old Gygax Games Yahoo Group (which I have archived but don't have access to this minute; I'll likely edit a shot of the original post in later once I get it).  The original post by Gygax on this though was copied to another forum, and is pretty straightforward:

So the original posts do confirm that Gary indeed was running new PCs at 3rd level.

At the same time, examining these posts, I think their ramifications have been overstated.  He was running this particular starting group in 2004-2005 at third level.  However, there's no evidence that this was the result of a change of philosophy on Gary's part.  What context there is suggests the opposite: that he was generally following the traditional approach but giving these particular PCs a boost because

In other words, rather than shifting in his old age to a more heroic or generous (however you prefer to term it) style of play, Gary was adjusting this particular campaign to this particular group.  He was a flexible enough DM to understand that the precise circumstances of the campaign called for a different approach: his player group was one-third the recommended size, and so he simply tripled their levels.  But somewhere along the line a game of Chinese Whispers began, and what was clearly a localized phenomenon became transmuted by the fanbase into something much more.

I have to admit that I like this, because my choice for Simulacrum was to boost starting PCs to two hit dice and such, specifically because I was aiming for parties of 4-5 players and knew that old-school editions assumed much larger groups.  It's nice to see that Gygax reached a very similar conclusion for the same reason at the same party-size scale.

As an appendix to all this, the Dungeon Craft Youtube channel had an episode on the original blog posts that set most of this off (either the 2005 Robert Fisher original or, more likely since that blog has been gone since 2013 or so, the 2010 Cyclopeatron post, which is still live).  That post has a lot more game-running detail than just PCs beginning at third level: numerous other house rules make an appearance.  Dungeon Craft doesn't credit the original source because they don't seem to know it or to have gone looking for it, instead mentioning that they got it from a follower on Facebook who in turn copied it down from some unnamed forum and lost the original source.  Long story short, the episode claims that these were Gygax's "SECRET rules for D&D".  In the comments however is a post from Luke Gygax:

As Luke's post says it's "all bogus", one might be tempted to say that includes the third-level start.  But Luke only specifically references other changes, not the third-level start.  Besides that, as we have actual posts from Gary mentioning it, the apparent contradiction can easily be explained by realizing that Luke wasn't involved in this particular campaign (though Alex Gygax was) and so wouldn't know the specific campaign house rules made for it.  Dungeon Craft, like everyone else dealing with this list of rule changes, assumed that they were all-encompassing alterations to every campaign Gary ran and described them in that light--a larger change of philosophy rather than just a set of campaign-specific rules.  As such, it was only natural that Luke, who would know better than almost anyone how Gary ran his games in general, would call it out as untrue, since if you start from the wrong basis (i.e. that Gary ran all his games like this past a certain point) it obviously is.
It may also be that the other house rules mentioned were also specific to an individual campaign that Luke wasn't involved in, but as I wasn't interested in the others I didn't bother to check.  Feel free to do some digging and let me know.
EDIT: I found the original source for the other rules.  Gygax posted them on the Troll Lord forum in August 2007 (or see below).  They were used for GenCon 40, but the impression I get from the post was that they were general house rules, not ones just used for that session (when he first mentions them he says "my house rule").  At the same time, it's possible that they were tournament house rules (meaning used at any tournament, but not campaign games).  Alternately, they may simply come from a point past which Luke was regularly gaming with his father, which is why he called them out as fake; the post comes less than a year before Gary's death, after all.
at June 22, 2021