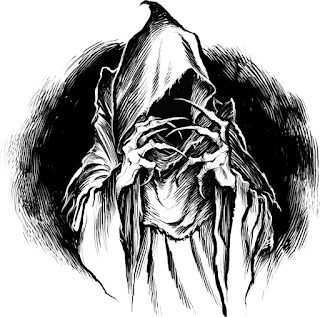 I've had a few requests to provide copies of my game, Simulacrum, and sometimes I've posted drafts in the comments section or to /osrg.   Overall though I've been reluctant to put it out in a main post.  In part that's because I wanted to continue to write about the process of development, and putting out a near-final release would seem to detract from charting its creation.  And I've not been in any hurry because this project has always been for myself, rather than based on any delusion that the world breathlessly awaits another OSR game.

But a lot of my reluctance has to do with wanting it to be the best that it can be before really releasing it to the wider world.  I'm currently running a playtest campaign with it; after a year in my players have hit 7th level and I'm looking forward to their exploration of the game's higher levels and the inevitable tweaks that will produce.  I like to edit things as much as possible, tweaking individual words, moving layout elements a few mm, and so on, and not to no effect: I think the benefits overall have been clear, looking back at older drafts.

Still, I think it's time.  So, without further ado, here's the beta for my humble game.  I'll be continuing to run my campaign, read blogs and other games, and take into account feedback, all of which will lead me to tweak things here and there, and eventually I'll put it up on DriveThru and make it "final", but for now you should find this perfectly playable. 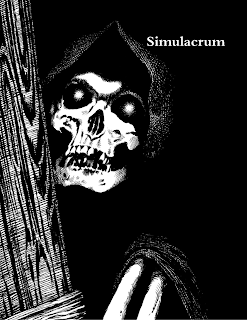 The Player's Manual is entirely self-contained, and should be everything a player needs.

The GM's Manual completes the game; it has some cross-referencing, in that it expands and comments on Player's Manual material, but is GM-only.

The Designer Notes are bonus material, made simply because I'm tired of downloading OSR games and having no idea what they did to depart from the TSR baseline, let alone why they did so.  Everything I've done has been for a reason, and I imagine at least a few of you reading a history/theory/game design blog are going to be interested in that kind of inside baseball, as I am.  By reading it, those on the fence can decide if a given change has a basis that makes sense for them.  Completely optional.

Lastly, the Playing Aids PDF consists of a few simple squares you can print and cut out to give to players so that they can announce their stances each round by throwing down their choice on the table, aiding the GM in running fights quicker.  They're not necessary at all: ever since I switched to Zoom I've been just handling that verbally, but in person I've found that it speeds things up.  The PDF also has a GM's sheet that I print off a copy of each session to track key session elements: time passing, treasure gained, and so on (the little dinosaurs in the time-tracking boxes are a reminder to roll for a wandering monster).

The only thing that I feel is missing is a character sheet.  I created one for my own use, but it uses graphical elements I stole from other works and so wouldn't be right to share.  Characters are pretty simple, as they are in most OSR games, and so this shouldn't be a major hindrance.

As I said above, most of this was about creating a game for myself: very few people play most OSR games.  What it does and why is thoroughly explored in the Design Notes document, and there's lots of changes.  However, in short, I do think this offers a few key things that other editions / clones don't:

A thorough design focus on 4-5 players.  As I've explored in other posts, old-school D&D assumes large parties: 6 PCs/NPCs at the very minimum, with 15-16 total towards the top end.  Old-school lethality is definitely a thing, but a lot of it comes from your modern group of 4 to 5 players rolling up to keeps in the borderlands without any retainers and getting mobbed by hordes of monsters placed to challenge player groups that were two to three times the size.  Simulacrum takes a combination of PC toughening and monster weakening throughout the game framework that brings things back to a more even keel in terms of party / enemy balance.  PCs aren't superheroes, but neither are they hopeless frails in the face of the enemy.  This isn't intended to make stronger heroes per se, but to level the playing field back to where things used to be, albeit in a non-traditional fashion.

Native hexcrawl support.  Using the system I've worked out in an earlier post, the game handles hexcrawling in a far cleaner fashion than the traditional D&D rules, making the wilderness portion of the game not just something paid lip service to, while at the same time not bogging things down with a mountain of tiresome Wilderness Survival Guide-type survivalist tedium.

Two core classes.  A tight two-page spread gives you all your core character creation, so that making new characters is quick and easy.  At the same time, a mix of modular add-ons and spell schools allows one to create a set of custom classes for their own campaign, or to have an extremely flexible structure that allows you to more readily capture a wide variety of archetypes and variations than normal while at the same time not needing page after page of classes and subclasses or descending into the hell of "builds".

Streamlining without compromising core play.  I've tried to make things run more smoothly in terms of aspects of weapons, armour, saves, task resolution, classes (as above), and spells.  However, I tried to avoid the common phenomena of streamlining to the point of removing what makes an OSR game actually OSR.  Things like encumbrance and the classic dungeoneering procedures are kept and even sometimes slightly clarified / expanded upon, and advice on how to use the engine in old-school games sown throughout, so that the game doesn't become a generic fantasy ruleset.  "Rules-light" is not an end unto itself.

I would welcome any questions or comments.  I'd only note first that between the GM's Manual and the Designer Notes that a lot of the "why" as to what I did is covered.  Still, if I missed something or are not clear there, by all means let me know.

I hope this is of some use to you out there, either as a full game or as a collection of elements for you to steal for your own OSR game, as is right and proper.  For those of you who commented on earlier drafts or run playtest games, thanks for your feedback over the years: it's been invaluable.  Happy adventuring.  Go forth and plunder!