We'll start at the beginning, of course.  No, that's not the Introduction: that would be leaping ahead of ourselves.  We need to start with layout.

Most people don't really care about layout.  Quite frankly, it usually shows.  However, there's no point in having a bitchin' ruleset if no one can read it or, more commonly, if no one wants to read it because it looks like an HVAC instruction manual.  Even if you have something readable, have you set up your book so that readers, at a glance, get a feel for the progression of information, without the font and colour choices making it exhausting?

The first step is to decide how hardcore retro I'm interested in being.  If I want one of those books that looks like it just rolled off the presses at Lake Geneva circa 1978, then that predetermines a lot of my approach.

If I do, I can be at least very grateful that all the detective work has already been done for me.  One need only open any of the modern WotC PDF reprints of old books and examine the font choices using Acrobat or what have you.  Better yet, I could go and visit this amazing site, which painstakingly breaks down every font used in every TSR D&D product.

But in the end, I'm not going to go with a 100% clone approach.  I'm not planning on doing it with the rules, and I see no reason to do it with layout, either.  The look of those old books is iconic, that can't be denied, but if we're not interested in the gimmick of slavish adherence then, quite frankly, we can do better.  I should hope so after 30 years of reflection and software advancement.

Some things are basic.  Don't use a terrible font, like Papyrus, or Comic Sans, or even worse, Comic Papyrus (yes it exists).  And try not to make your book look like some kind of jumbled roadkill.  But a lot of that is easier said than done.

Once I started work on this project, I bought or downloaded every retroclone I could.  I was interested in how the field as a whole tackled all the various rules issues and possible approaches, to be sure.  However, I was just as interested in how they chose to organize that information.  I'm going to examine a few of the major clones here and go through how they choose to do things.  I want to be clear that I have no interest in making light of the designers or all the work that's been put into these products.  This is dispassionate analysis. 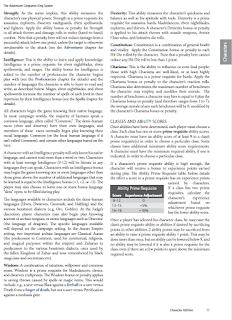 ACKS is a very clean layout.  It generally takes its own path, the only clear nod to old school layout being the habit of solid block paras with no paragraph indents (as seen in the 1st edition Player's Handbook and DM's Guide).


The base font is Minion Pro, a subtly serifed font.  It works is about all I have to say about it.  Spacing on the page is sufficient: in particular, there's adequate column spacing, so that even the above page full of info is still maneagable.  Page numbers in the corners rather than the middle is a good choice: if you're actually intending to use this as a book, flipping through it means you'll see numbers at the corners, but have to work more to see them if they're in the middle of each page.  In other words, corner page numbers allow for faster perusal at the tabletop.  The keywording in blue is nice too.  I think a subtle use of colour is great; the only thing is not to rely on the colour alone (which ACKS does not).  If you use it as a bonus feature, while understanding that whoever prints the book out may just choose to go greyscale and lose it, then you've added something for some readers and cost the rest nothing.  Lastly, the tabs on the page edge are another really nice quick-perusal aid. 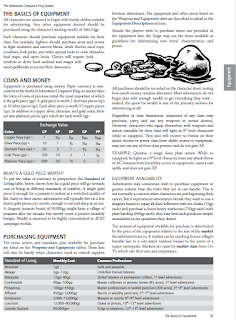 What don't I like?  I'm not a fan of putting the book's name on every page.  If people don't know by page 200 what they're reading, something has gone terribly wrong.  It's a waste.

The use of offset flavour text once in a while is nice (not pictured), but the font chosen for it makes it hard to read.
While I think the spacing is sufficient, I'd say it's only that: the pages overall often feel a bit stuffed.  There are a lot of pages in the book like the first sample I've provided, and it gets wearisome after a while (admittedly, the shots aren't at 100% sizing, and the book looks better when you zoom in to natural size).  The tables being just various shades of grey adds to this effect.  This is all only to the point of general aesthetics: the book itself is perfectly readable, but I like pretty if possible as well (to be fair, ACKS is 270 pages, so that there's a lot to cram in, which has to be considered).  The overall feel I get from ACKS is drab but very serviceable.

C&T received a graphical upgrade after it was out for a few years, and this really helped its look. 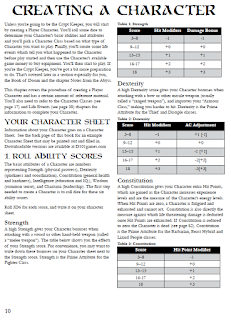 I like the use of distinctive fonts for chapter titles, and the one used here (Moria Citadel) is particularly good.  I'm much less a fan for use below the level of chapter header, as C&T does with its Header 2s.  What you gain in characterfulness by using these sorts of fonts, you can sacrifice in readability.  Still, it's not a serious issue here, unlike some overly grotty fonts.

Tables in the remaster are improved by the use of gradients to make them easier to consult (in the original they were just all-white boxes).  However, the default thin lines used in their construction keeps them from looking as good as they could be.  Thicker or double lines make things look a lot more professional. 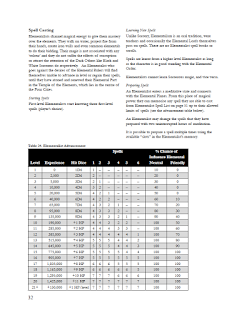 Unlike with the shot above, this shows a full page, white space and all.  C&T overdoes the white space at times, leaving things feeling a bit empty.  The text could run more to the outside of the page (the left, here).  This is particularly noticeable when you examine the column widths, which are really tight, and the needlessly squished table.  There's no reason why that table couldn't have been brought to the full width of the page, giving the large amount of info contained within it room to breathe.  The overall effect here is cramped and overly spacious at the same time. 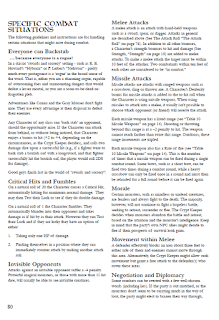 This shows off some of the best of C&T.  The space between the columns in the middle is still a bit too tight, but each section is clearly differentiated from one another.  The headers could use some padding up top to set them off more from the paras preceding them, however.  I do like the integration of flavour text and rules text: this is tricky as all hell, but the "Everyone can backstab" lines are superb.  There's no confusion between flavour and mechanics, and you manage to get the rules reinforcing the theme.  It's great, even if I don't think I'd be inclined to write that way. 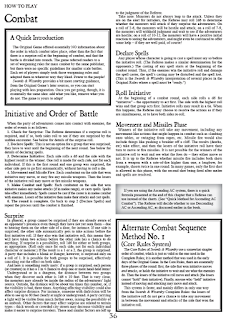 This is a shot from the S&W Complete Rulebook (I don't have the other S&W releases).  For me, it's pretty much S&W in a nutshell.  Again, this is a 75% zoom shot, so it's not really as cramped as it looks here, but yes, the text really is in general quite cramped.  9-point Times New Roman, no padding or kerning, and very very small para indents make for a claustrophobic feel any time a significant text block appears.  This is made worse by the book's tendency to avoid new paras: many entries are solid single-para blocks where you really could add a new para or two to break it up somewhat.  And our old nemesis, centre-page page numbers, reappears (and without much padding between it and the text above it, so it's harder to pick out). 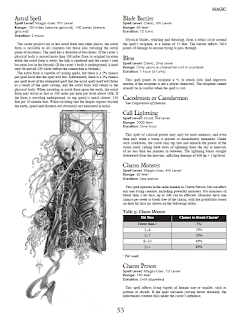 At the same time, when the book does want to offset something, it does so superbly.  Its text boxes look sharp thanks to their double borders, and it uses an eminently noticeable header style with sufficient padding that immediately tells the eye that something new is happening.  The art here is crammed a bit too close to the text, and I don't like the mix of sans serif Century Gothic for the spell stats while sticking to seriffed Times New Roman for everything else (it clashes rather than complements), but overall, the spell section in particular is very easy to peruse and looks very sharp.


I'll look at a few other other books next time, and then we'll draw some conclusions and start picking layout elements for Simulacrum.
at October 16, 2017